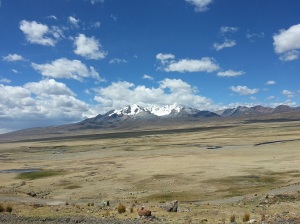 Our view along the way today

What a difference the sun makes! Huaraz is lovely. The view is amazing… it’s what I imagine being in the Himalayas must be like, surrounded – no, dwarfed – by incredible, and incredibly different, majestic mountains. Wow. I can now understand why people come here!

Today was the best day on the bike so far. The scenery, road, weather and the riding conditions generally were just fantastic. And ‘best day’ is an even bigger call given I was struck down in the morning by a case of Bali Belly… or, more accurately, Peru Belly. It’s the first time on the trip that I’ve had any sort of health hiccup. Although Adrian wasn’t happy that I was feeling somewhat suboptimal, I suspect a little part of him was happy that – for once – it was me! He was fine. The upside of Peru Belly is that it distracted me from any sore muscles I might have otherwise felt from yesterday’s intervals!

I wasn’t in a state fit for riding until about 11am, and we finally hit the road at noon. Once we managed to get through a short yet crazy part of the town where the roads were dirt and stones, and the tuk tuks moved in all directions ie not only up and down but also back and forth across the street, we were just blown away by the view. We were riding on a smooth, nicely asphalted, gently curved road alongside some of the most spectacular mountains I’ve seen. And they were big… we were already at about 4,200m ourselves, and we were being dwarfed by some of the biggies. Really, I can’t describe it – it was spectacular. The serpentine of the road was matched by the serpentine river than snaked between us and the mountains. There were little towns and small villages dotted along the way, with the brown mudbricks and thatched rooves providing a nice contrast to the fields terraced with rows of small, carefully assembled, rocks. Animals were kept from roaming either by similarly assembled stone pens, or by having their two front feet tied together with a stocking. Seeing pigs and sheep hobble along the road in their own version of a personal three-legged race was really funny, in just a lovely sort of way. We also saw lots of locals, in traditional dress, walking along the road. Sometimes carrying a switch made from straw which they used to spur their animals on, sometimes just walking with their family, always smiling and waving hello.

Late in the afternoon, we got stopped at some roadworks where we were about three cars from the front. When we asked the lollypop lady how long we’d be stopped there for, she told us two hours. Two hours??!!! It was already 5pm and we still had about 100kms to go before reaching our intended destination. Fortunately, the two hours turned into thirty minutes, and we were on our way again… only to be stopped by Jeremy’s bike failing. We’re still not sure what’s wrong with it, and we did manage to limp another 40kms to the next town (we were in the middle of nowhere), but he’s essentially got no throttle control and the bike revs up and down independent of the throttle. Not great – especially when you’re pushing sunset and are riding on windy, narrow roads along a cliff edge.. with no fence, of course.

For now, we’ve got a hotel, the bikes are securely out of sight and we’ve eaten dinner at the only restaurant in town, a roast chicken place right next door to the hotel. Somewhat bizarrely, three Germans arrived here just after we did (I mentioned we’re in the middle of the Peruvian highlands, didn’t I?), only they were in two tuk tuks and are in the middle of a charity tuk tuk challenge around Peru.

We’ve got 60kms to go in the morning before hitting the town we’d hoped to reach tonight. We’ll be staying there in a BnB run by motorbikers and ADVers, so hopefully the fellas will be able to get Jeremy’s bike sorted while I wander around the town. 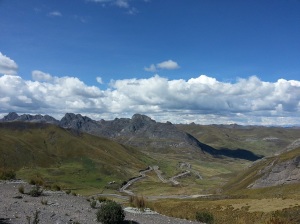 The road through the mountains… very windy,and in surprisingly good condition! 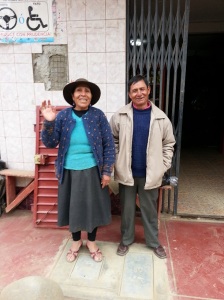 The couple who owned the hotel we stayed at

3 thoughts on “Best day on the bike so far”