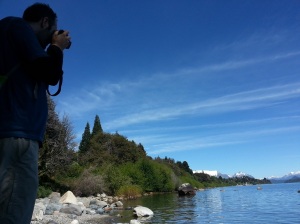 Adrian taking photos of the lake in Bariloche

Bariloche is an absolutely stunning town. It sits on a massive freshwater lake, Nahuel Huapui, and is surrounded by gorgeous mountains. It reminds me a little bit of Queenstown in NZ and a little bit of Switzerland. Although it was really cold when we arrived last night, this morning was lovely – sunny and bright… perfect weather for a 5km walk to the base of Cerro Otto and a ride up the mountain in a cable car! The view from the top was spectacular. We sat in the sun for a while, admiring the view and watching paragliders take off and slowly descend the 2000m or so back to the Bariloche town centre. So relaxing, it was great. We then spent the rest of the afternoon wandering into different shops and cafes and tasting some of the town’s famous chocolate. Dinner was comprised of the best empanadas I’ve had on the trip so far… full of fresh spinach, ricotta and just a touch of garlic, onion and chilli… delicious! 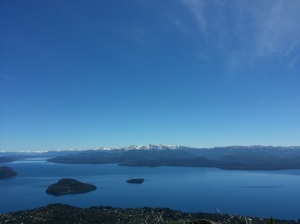 The view from the top of Cerro Otto, Bariloche

We got new tyres on the bike today and headed for Bariloche, back over the border in Argentina. It’s a town famous for its chocolate – as well as the stunning lakes and mountains that surround it. The border crossing was good; another example of Chilean/Argentinian efficiency. The ride was very pretty, with huge lakes and snow-topped mountains, volcanoes and glaciers accompanying us for much of the route. We also had an early opportunity to experience some of the infamous Route 40 wind, which is so strong that it’s literally blown many a biker off their bike and the only way to ride in it is to lean the bike at quite an angle into the wind. I have to say, I’m happy that I’ll miss most of it by flying back up from Usuhaia to Buenos Aires at the end of the trip rather than riding – and it’ll be easier for Adrian to ride in it without me on the back, too. 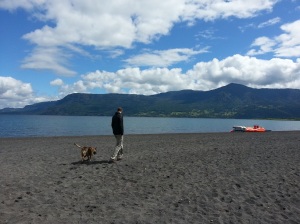 There is a giant, active, snow-covered volcano standing guard over the city of Pucon. It sort of reminds me of pictures of Japan’s Mt Fuji in advertising brochures – only in the flesh, it’s more impressive.

We’re in the Chilean Lakes District, an area considered one of the most beautiful in Chile not only because of the volcanoes, but also the azure lakes and the emerald forests. I have to say, it’s pretty spectacular. Pretty, and spectacular. It reminds me of a cross between Switzerland, New Zealand and the southern parts of Germany.

The weather has also improved – it was lovely and sunny today… which made the lakes and the volcano all the more impressive. It’s amazing how the sun does that.. a bit of bright light, and nature just sparkles.

Helpfully, there’s also good coffee and a vegetarian restaurant here… so in addition to natural beauty we’ve got our creature comforts sorted!

We walked around the various lakes looking for somewhere renting out sail boats so we could get out onto the lake, but they only had very uncomfortable looking manual paddle/pedal boats which didn’t really excite us. So instead we read our books while eating icecream in the sun on the lake’s foreshore.

Over 700+ kms today we went from warm (hot!) sunny weather where getting sunburnt was a strong possibility to a little town by a big lake where everyone seems to be wearing a beanie. And it’s for good reason – it’s freezing!!!

So – we headed up to Sydney from Canberra this weekend (just under 300kms) for a family birthday celebration. It was fantastic! Lovely weekend catching up with everyone… and with less than two months now until we depart on *the big trip*, these family get togethers are even more special.

It was also an opportunity to test out the newly customised bike seats – and our heated gear! A jacket for Adrian, and jacket and gloves for me.

Gear-wise, I’d rate the trip as mostly successful… although it looks like Adrian will need some more customisation on his custom seat. It was ok for the first hour or so, but then apparently it kept tipping him forwards. Mine was good… I didn’t actually notice it, which I’m thinking is a good thing! Especially seeing that I did notice that the old seat was rather uncomfortable.

Heated jackets are amazing! They make a huge difference… and also provided a nice flashback to being very young, when mum used to heat the bath towels for us before we got out of the bath. She’d then wrap each of us up in a lovely warm towel and give us a big hug. Heated jackets are just like that – bliss! One thing they don’t help with though, are cold knees. Hmm… will definitely be going the thermals and water/windproof pants over my bike jeans next time it gets down to 2 degrees or thereabouts. Hopefully my icebreaker leggings arrive soon!