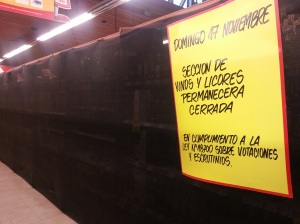 Alcohol aisle in the Puerto Varas supermarket on the day of the alcohol ban – the covered all the shelves with shade cloth!

Today is election day in Chile and, in a very familiar sight, people are streaming into local schools to cast their (voluntary) vote. In a few of the cities we drove through, the police had closed streets around schools to cars and there were people walking everywhere. I didn’t see hoards of volunteers handing out ‘how to vote’ cards though – maybe they don’t do that here?

We started the day with a leisurely walk along the river into town for coffee. The sea lions from yesterday had moved upstream about 500m and were hanging about right outside the fish market.. not surprising really, given the guts etc being chucked by fishmongers into the water – and in some cases, right into a sea lion’s mouth! It was very entertaining to watch.

There’s a famous brewery in town, Kunstmann, and we’d planned on doing a brewery tour followed by lunch in the (apparently) excellent restaurant there. What we hadn’t planned on was the fact that it’s illegal to sell or serve alcohol in Chile on election day. Seriously. The ban applies nationwide, for the full 24 hours and appeared to be strictly followed… at the brewery, we were advised that we could still do the tour if we wanted to, however they would only be offering alcohol-free beer as a part of the tasting (not withstanding Adrian’s pleas for just a little taste of the other stuff!). We were also welcome to order a beer flight in the restaurant, however we would only get alcohol-free beer. So disappointing! And yet somehow hilarious…

Adrian standing outside the Kunstmann brewery

Later on, once we’d reached Puerto Varas, there were a few more examples of how seriously the ban is taken: the restaurant we ate in for dinner had big signs in their window saying ‘we’re not serving alcohol today,’ and in a local supermarket, they’d actually draped shade cloth over the shelves in the alcohol aisle and plastered it with big signs.

We’re in a part of the Chilean Lakes District that is famous for looking (and being) like Bavaria in Germany. I’m not sure I agree. There were other towns further north that definitely reminded me of Switzerland or southern Germany, but not where we are now. The only German-eske thing that happened was when I walked into a hostel to check their rooms and prices, the first question the woman asked me was ‘do you speak German?’